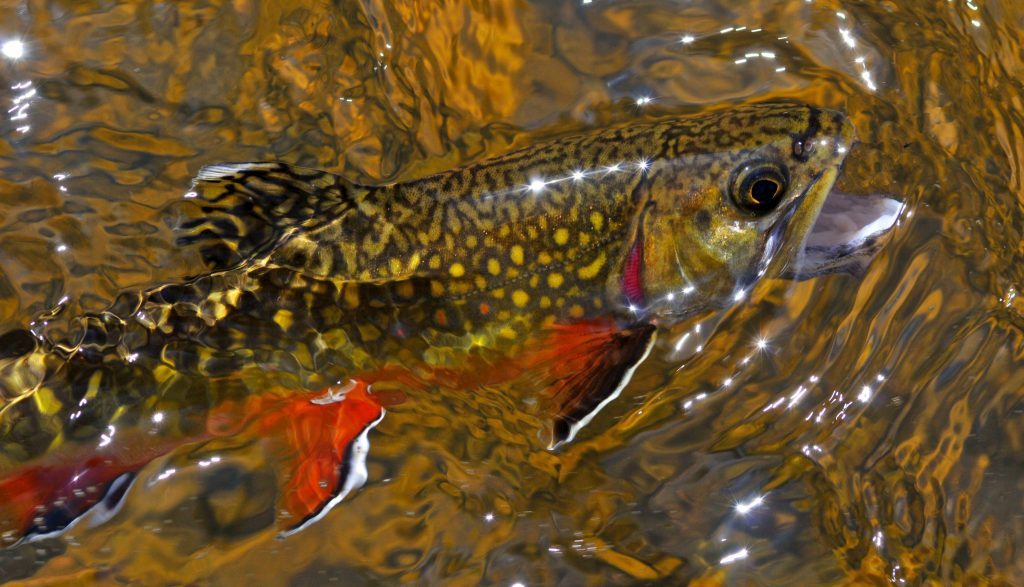 Michigan is famous for being the only state with access to four of the five Great Lakes. It boasts the largest freshwater coastline in the world, as well as 26,000 inland lakes and countless rivers and streams. With almost every freshwater fish under the sun, this place is an angler’s dream! But which species holds the crown of Michigan state fish?

Native to the clear, cool ponds and streams of Michigan, the Brook Trout is one of the most popular freshwater game species in the northern US. So much so, that eight other states named it their official state fish. That makes Brookies the most decorated fish in the nation! What is it that makes these guys so special?

Brook Trout aren’t the largest of fish. They’re not even the largest of Trout. In fact, they rarely eclipse the 10-pound mark. However, these fish have a few distinct qualities that make them a revered species for anglers far and wide.

For starters, Brook Trout are some of the feistiest game fish around. Pound for pound, you’d be hard-pressed to find a more stubborn freshwater fighter. They’re also opportunistic hunters that will eat just about anything that fits into their mouth.

Second, Brook Trout taste amazing. They boast a mildly sweet, “non-fishy” flavor, and are a favorite for many Michigan natives. And then, there are their looks. Brookies are some of the most distinctly beautiful fish you’ll ever see.

Brook Trout colors range from olive, to blue-gray, to black. Their sides are splattered with golden worm-like patterns and red, round spots in-between. The lower fins are orange, with a clear-cut black and white trim on the edges. In males, the underbelly is orange but, come spawning season, it intensifies into a bright red. Like we said, a distinctly beautiful fish!

Brookies typically range between 0.6 and 6.5 pounds but they can, on occasion, get even bigger. The largest recorded Brook Trout ever landed in Michigan was a 9.5-pound, 28.1-inch whopper. It was caught in 1996 by an ice fisherman on Clear Lake, Houghton county.

To find Brook Trout, you’re going to take a walk on the wild side. And by that, we don’t mean turning on the best of Lou Reed! Brook Trout tolerate only the most pristine of waters. That means that you’ll need to visit streams and lakes with virtually no human habitat around them. Thankfully, Michigan has plenty of those.

Brookies prefer colder waters. As a result, they’re generally more abundant in the colder Upper Peninsula. This is especially true during the warmer months of the year. They say that if you find a clear and cold stream in the Upper Peninsula, there’s a good chance that there are Brookies in it.

Of course, that doesn’t mean that you can’t find a good Brook Trout fishery on the Lower Peninsula. Some of the best spots on this side of the Wolverine State include the Au Sable and Manistee rivers. There are also plenty of smaller lakes in the northern reaches of the Lower Peninsula which you can check out.

The Trout was named the state fish of Michigan in 1965. At the time, there was an ongoing debate about whether the honor should go to Bluegill or to Trout. Thankfully for the Brookie, the Trout camp was supported by none other than one of the state’s senators. His name? Terry L. Troutt.

So there you have it. Now that you know why the Brookie is Michigan’s state fish, there’s nothing to stop you from catching these wily Trout.

What’s your favorite thing about Brook Trout? Do you think that another fish is more deserving of being the Michigan state fish? What’s the state fish where you’re from? Let us know in the comments below.