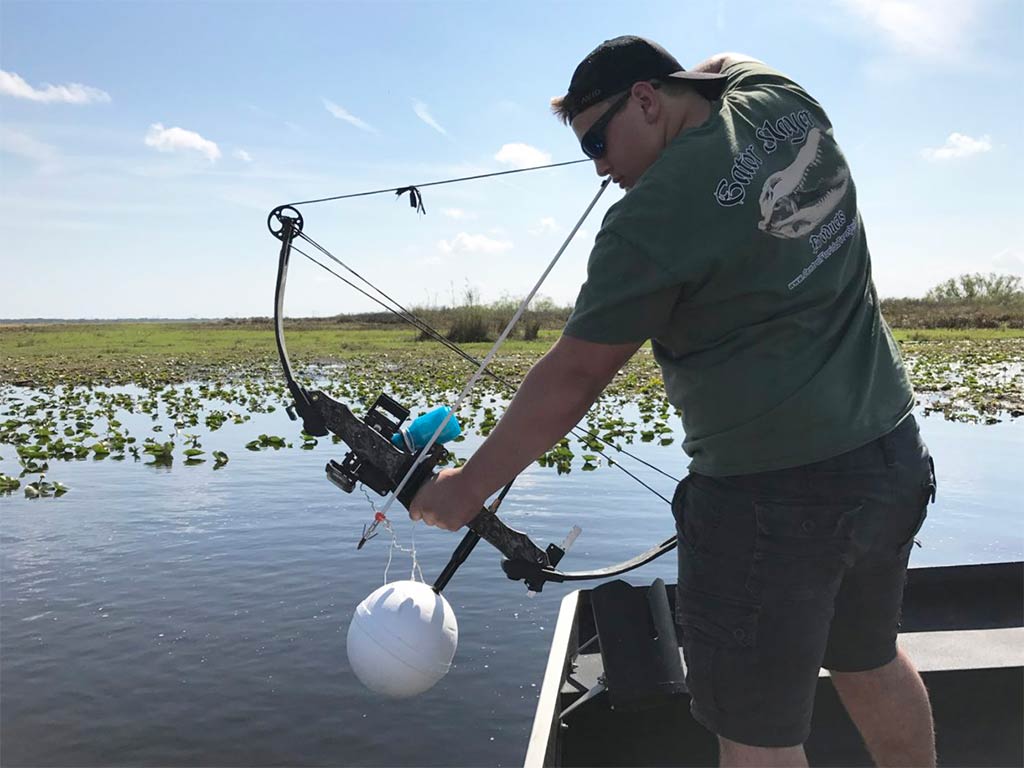 Looking to test your skills while also experiencing some serious thrills? A Florida bowfishing adventure is right up your street. Combining the technical prowess of hunting with the incredible rewards of angling, bowfishing is one of the most exciting sports around. And where better to do it than in the US’s fishing heartland?

18% of Florida is water, and the “Sunshine State” boasts access to incredible marshes, flats, coral reefs, and even freshwater fishing grounds, where you can test your bowfishing skills. Go after anything from Catfish and Stingrays, to Flounder and Alligator Gar on what promises to be a fun-filled experience.

In this guide, we’ll introduce you to what makes bowfishing in Florida great. We’ll run through the top catches, the best spots, and some rules and regulations, as well as much more. So, by the time you’re done reading, you’ll be ready to book your trip. Now let’s dive in!

For any first-time bowfishers, you’ll want to know why you should choose this method of fishing over any other kind. Well, we’re here to tell you that it’s incredibly fun, among other things. It can be much easier for beginners than casting with a rod and reel! However, once you learn the basics, the sky’s the limit with the skills you can develop and fish you can target.

While you’ll be targeting species within the radius of a few feet, you’ll want to creep up carefully so as not to disturb the fish. Timing is also key, as your target may swim off before your bow has even entered the water, so be prepared to hone in on your fish to ensure success.

Of course, you can bowfish from shore or from a boat, but you’ll want to make sure you’re on a shallow-hulled vessel to get to the prime spots. You can also choose whether to fish during the day or at night, with the cover of darkness adding to the mystery of it all, and yielding great results, too!

What can I catch when bowfishing in Florida?

We mentioned that the sky’s the limit when it comes to what you can catch with a bow. That’s why we’ve split this bit into freshwater and saltwater subsections, to make it easier for you to know what to expect. One thing you should know, however, is that only non-game freshwater species can be targeted with a bow. But that doesn’t mean you can’t land yourself a tasty treat. In fact, the opposite is true!

While you may not think of Carp as delicious table fare, we’re here to tell you you’re wrong. Across the pond in Europe, they’ve actually been overfished in parts because of their food qualities! In Florida, however, Carp are considered an invasive species that need cutting down. That’s why targeting Carp with a bow will actually see you help out the environment.

Come in spring for the best action, as they feed close to the surface. And you can grab their attention with something as simple as dropping some sweetcorn into the water! Once you’ve hooked one, you can take it home for dinner, or use it as fertilizer or animal feed. So everyone’s a winner!

One of the top targets when bowfishing in Florida, Tilapia is a similar creature to Carp. They’re just as invasive and also provide tasty meat, so you and the environment benefit from targeting them.

You can target them during the day year-round in lakes and rivers across Florida. Explore the calm waters, full of vegetation and wait patiently for them to come into sight. Then you’ll need to pounce quickly. You may not have long to fire your bow, with these rapid creatures promising to swim away if they spot you. Make sure to bring plenty of spare gear for this eventuality. The rewards are really worth it!

Catfish aren’t invasive like the two fish we’ve mentioned so far, so we suggest only going after them if you really like their meat. If you do, then they provide plenty of fun. As you’re probably aware, Cats feed near the seabed, making them an odd choice for this list, but they’re a top target once you’ve mastered the art of bowfishing.

Bring polarized sunglasses along if going after them by day. The best time to target them, though, has to be after nightfall. This is when they’re at their most hungry and, with the help of LED lights, you’ll spot them near bends or rocky and sandy riverbeds. Just make sure to keep quiet and still so as not to scare your prey!

There’s a serious change of pace when it comes to the final featured fish on our list. These prehistoric creatures will smash about in the water to alert you to where they are. But you’ll still have to be quick, not to mention strong! These 100 lb+ beasts may need more than one arrow to fatally get them, so beware for the fish to run away with your first one still in its back.

Of course, it’s not all action, and you’ll need to be patient to wait for them to show up. Come in spring when they spawn for the best action along the shallow flats, while nighttime summer adventures are also productive. Hit the tailwaters full of baitfish, and don’t forget to bring your heaviest gear.

With three sides of the Sunshine State bordering saltwater, it’s no surprise that sea bowfishing is popular in Florida. From the Panhandle to the Everglades and back up the Space Coast, there’s plenty for you to target.

Flounder is the bread and butter species of saltwater bowfishing in Florida. Just like gigging in Texas, it’s a way of life here, with endless hours of fun ending up with even better prizes. As with some of the freshwater creatures, nighttime can be the most effective time to target them. Use your lights to find them on the sea bed, and fire away!

Hit the inshore flats as shallow as 2–4 feet for the best results. Bowfishing in deeper water can be trickier, with the bow slowing down. But in better news, these are year-round fish in almost all of Florida’s waters. But they’re at risk of overconsumption, so you’ll have to ease off between mid-October and the end of November.

Also known as “Convict Fish,” these small, striped fish may at first seem like a strange choice. However, Sheepshead are actually among the most popular creatures that anglers go after with a bow in the Sunshine State. Why? Well, other than their delicious taste, they also cruise in schools, giving you a better chance of landing one. And, while they may seem small, their broad bodies make for a good bowfishing target.

Come in late winter or early spring for peak Sheepshead season. The best action will take place with the incoming tide, as these fish come in to feed along the bars. And boy, are they hungry – there’s a reason they have all those teeth! Whether visiting during morning or night, you’re always in with a chance of catching a convict!

If you thought Sheepshead’s body shape was ripe for bowfishing, just wait until you come into contact with Rays. These flatfish are big and broad, and among the only species you can target with a bow from a far distance. You’ll usually need a boat to hunt for these nearshore, but they can come close to land occasionally.

South Florida and the Keys are home to a year-round population, meaning there’s never a bad time to visit. If you want to fish further north, however, you should come in summer. Stingrays, Cow-Nosed Rays, and Skates are all there for the taking, but Manta Rays are protected. If going after a Stingray, you’ll also want to learn how to deal with its poisonous barb!

Those were just a few of the top targets when bowfishing in Florida, but there’s plenty more where they came from. Mullet are also a popular catch inshore and in the rivers, and their slender bodies make them a challenging target. Mangrove Snapper and Black Drum are equally popular here as, just like Sheepshead, they roam in schools.

When it comes to the reefs and deeper waters further out, Cobia and Kingfish can be found in abundance. Don’t be surprised if they’re following the Rays, giving you two for the price of one! Elsewhere, Gag Groupers are also available, meaning there’s plenty to keep you entertained.

Where to Go Bowfishing in Florida

Florida didn’t get its excellent bowfishing reputation for no reason. It offers up some top hunting grounds. Whether inland or in saltwater, you’re not far away from somewhere you can aim your bow. Here’s our list of the best spots:

What gear do I need for bowfishing in Florida?

If you’re heading out with a charter or guide in Florida, it’s always worth checking whether you need to bring your own gear. While some specialized guides may let you use their equipment, others may require you to have your own.

First, you’ll need a bow. Old hunting bows can be repurposed, but you’ll need a line and reel to go with it to retrieve your arrow after hitting (or missing!) the fish. These sometimes come together with purpose-made bowfishing gear, or you’ll need to buy or rent them separately. Make sure you get some strong arrows, as they need to withstand the seabed, rocks, and the fish themselves. And don’t forget about barbed tips, to make sure they stay in the fish!

On top of that, we already mentioned that you could do with some polarized sunglasses if fishing during the day. If fishing at night, LED lights are best for giving you a full picture of what you’ll be targeting.

So before you set off on your Florida bowfishing voyage, there are a few rules you need to be aware of. While we mentioned that only non-game fish can be caught in freshwater, there are many other regulations you’ll need to abide by, especially in saltwater.

There’s a comprehensive list of species that are prohibited to target with a bow. But even those you can target must usually be within certain size limits. If you’re new to the sport, it’s best to avoid targeting any fish if you’re not sure of its size – this is especially true for Redfish. Most anglers say “If you don’t know, don’t!”

In addition to that, there are also bag limits on the amount of fish you can take home with you. These can range from being lenient in the case Rays to pretty strict, such as for Alligator Gar. Check with the FWC before heading out, as they’ll have all the latest information.

And on top of that, you’ll need a fishing license wherever you’re casting your line. The only exception is if you’re fishing with a registered saltwater charter. Find out how to get your freshwater and saltwater permits with our handy guide.

And You’re Good to Go!

Now you know everything you need to about bowfishing in the Sunshine State, it’s time to experience it. Wherever you head, there’s a good chance that an exciting species is hiding nearby. Grab your gear and hit the water, and you’ll be sure to head home with a worthy treat. We bet you’ll come back time and time again for more!

Have you ever been bowfishing in Florida? How was it? Let us know in the comments below – we love to hear from you!