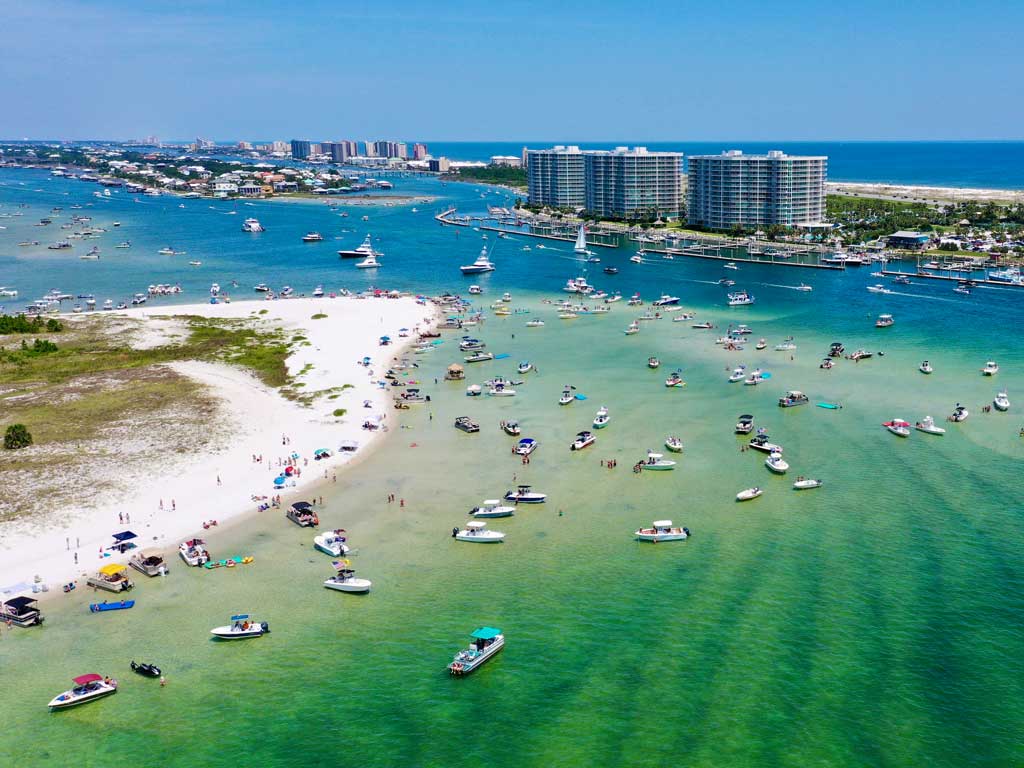 Sitting in the very heart of the South, the “Yellowhammer State” is famous for its beauty, hospitality, and delicious cuisine. It also boasts a long sportfishing tradition, welcoming anglers from all walks of life. If you’re fixin’ to explore its many waterways, it won’t take you long to discover just how outstanding fishing in Alabama is.

Alabama is home to some of the finest reef fishing on the planet, attracting thousands of anglers each year. That being said, the freshwater angling is no less impressive, thanks to the numerous lakes and rivers scattered throughout the state. And if that’s not enough, you can head offshore to the Gulf of Mexico, and get into a tussle with a whole range of pelagic fish.

Are you ready to find out more? Let’s dive into it then! This article will cover a few ways you can go fishing in Alabama. We’ll also provide some details on which species you can catch, as well as where to find them. Towards the end, you’ll be able to read about some of the regulations you should keep in mind before you start your trip.

Considering how diverse fishing in Alabama is, it would probably take a few lifetimes to explore all the creatures available. However, there are some fish you don’t want to miss out on if you’re visiting this corner of the South. We’ll outline some of the more popular species you’re likely to encounter on your ‘Bama journey. Hopefully, you’ll get to hook into some of these, in addition to many others.

If there’s one date that most anglers in Alabama have marked in their calendars, it’s the yearly opening of the Snapper season. And for good reason, Red Snapper fishing in Alabama is absolutely unbeatable. In fact, in this part of the Gulf Coast, these delicious fish are found in such abundance that the state has earned the moniker “Red Snapper Capital of the World!”

What sets Alabama apart from the rest of the Gulf states is the sheer number of artificial reefs found off its coast. These serve as a perfect habitat for a number of species, including Red Snapper. This means that there’s typically no need to go far offshore to catch your fill of these tasty reef dwellers.

The federal Snapper season usually opens up in June every year, making summer the prime time to visit Alabama. However, you should also keep an eye out for Red Snapper mini-seasons. Sometimes, the season reopens for a second time during fall, giving you another week or two to target these fish.

Imagine yourself on a boat, fishing over some reefs. Suddenly, you feel a bite and the rod starts bending as the fish slowly makes its way to the bottom. You try pulling it in but it won’t budge. Did your hook catch that rusty Cadillac sitting on the seafloor again? Nope, just a reef donkey! While Amberjack aren’t the quickest of fish, they make it all up with their immense power and stamina.

Much like other reef species, Amberjack are right at home along the coast of Alabama. Compared to Snapper, you’ll typically need to go a bit further offshore to find them. However, for anglers looking for a heavyweight battle, it’ll be absolutely worth it. Amberjack will put a fight that you’re sure to feel the next day, once that muscle ache kicks in.

When you’ve had your fair share of reef fishing, mixing it up with some trolling is a great way to get more variety. One of the most popular species you can chase after in this part of the Gulf Coast is the exotic Mahi Mahi. These fish are quick biters, good fighters, and they’ll often put on a show with their acrobatics. On top of that, Mahi Mahi are delicious whether you poach, fry, steam, or grill them.

In Alabama, the best season to catch Mahi Mahi is anywhere between spring and late summer. You’ll often find them around the floating debris or rip lines, feeding on baitfish. You’ll usually have the most luck fishing for them in the 10 to 20-mile range and beyond. However, Mahi Mahi do sometimes come within a few miles from shore, making it possible to troll for them without venturing far.

While we could ramble on about saltwater fishing for days on end, it would be completely unfair not to mention Alabama’s state fish – Largemouth Bass. After all, they’re one of the smartest and most elusive species out there, always putting up an exciting challenge. We’d even say it’s often Bass fishing that makes casual anglers truly fall in love with the sport.

Given that it’s home to Lake Guntersville, you can bet that Bass fishing in Alabama is world-class. Thanks to the state’s climate, it’s possible to catch them year-round, with late winter and spring being the best times to reel in a trophy. Multiple Bass tournaments take place on different lakes throughout the state, making Alabama a prime destination if you’re interested in competing.

With the few species we mentioned so far, we’ve really only scratched the surface. In addition to reef and offshore angling, Alabama features a fantastic inshore fishery. Close to shore, you’ll get a chance to reel in Redfish, Speckled Trout, Flounder, Sheepshead, and more. These species make for ideal targets if you’re not keen on long boat rides.

On the reefs, Red Snapper is certainly all the rage, but even when their season closes, the action doesn’t stop. Delicious Triggerfish, Grouper, and other types of Snapper are just some of the other fish you can catch. Nearshore, you’ll also run into Cobia, Spanish and King Mackerel, and different species of Sharks.

Finally, let’s not forget about the deep sea fishing in Alabama. As long as you’re prepared to venture 30 or more miles offshore, you’ll have a shot at monster Tuna, Blue Marlin, Sailfish, Wahoo, and more. The angling opportunities in the Yellowhammer State know no bounds. It’s really all about what you want to do first.

Best Ways to Fish in Alabama

If you’re looking to experience all the different aspects of fishing in Alabama, you’ll definitely need a boat. After all, things such as hitting the reefs for Snapper or trolling for pelagics simply can’t be done otherwise. A boat will also help you explore as many spots as possible, whether you’re fishing on a lake, river, or the ocean.

No matter your skill level, hopping on a fishing charter is a surefire way to ensure a successful trip. An experienced captain can let you know exactly what’s biting at the time of your trip and help you create an adventure to suit your preferences. Most of the time, charter captains in Alabama will also take care of all the fishing equipment and prepare the bait you’ll use.

While you’ll certainly get more variety on a boat, it’s by far not the only way to have fun or reel in some fish. Along the Alabama coastline, you can catch species like Redfish, Speckled Trout, Black Drum, and many others. Not to mention all the freshwater fish such as Bass, Bream, and Crappie that are just a few casts away.

Believe it or not, there’s also some great Trout fishing in Alabama. Even though they’re primarily a coldwater fish, there are several places throughout the state where you can fly fish for them. The Sipsey Fork of the Black River, as well as Mud Creek, are known Rainbow Trout spots. They’re also stocked at Bankhead Lake and a number of ponds in the northern part of Alabama.

Now, if you’re one of those anglers that like to catch their fish by surprise, you definitely need to give kayak fishing a try. With a kayak, you’ll be able to silently paddle up to the fish and present the bait without causing so much as a stir. It’s also a fantastic way to experience the local nature up close and in an intimate manner.

It goes without saying that the waters of Alabama are very well suited for kayak fishing. Places such as Little Lagoon, Dixey Bar, or Robinson Island are all solid saltwater choices if you’re trying to decide on a spot. In terms of freshwater fishing, you pretty much just need to pick a lake. As long as the weather conditions are right, they should all be great for kayaking.

Alabama is blessed with over 77,000 miles of rivers, streams, and lakes. If you add on all the saltwater fishing grounds off the Gulf Coast, it becomes clear that there’s a lot to explore. In general, it’s hard to make a mistake, as fishing in this stretch of the South is truly amazing. Even so, we’ve singled out a few places we consider worth visiting.

The fishing regulations can vary from state to state so it’s always a good idea to brush up on them before you set out. In Alabama, you won’t need to worry about getting a fishing license if you’re fishing aboard a saltwater charter. Otherwise, anglers between the ages of 16 and 65 will need a permit whether they’re fishing freshwater or saltwater.

You also may need to purchase add-ons for your fishing license if you plan on harvesting certain species. For example, if you hook into a Mangrove Snapper, even from shore, you’ll need a Reef Fish Endorsement if you plan on taking it home. Feel free to check out our Alabama Fishing License article for more details.

Apart from licenses, you should also read up on fish species regulations. Knowing what you can and cannot keep will help you set the correct expectations for your trip and will save you the trouble of having to Google it once you pull out a fish. You can get more information by visiting Outdoor Alabama, the state’s department of conservation and natural resources.

To put it in simple terms, fishing is the heart and soul of Alabama. It’s both a fantastic place to reel in your first fish and a destination where you can fight some of the toughest fish on the planet. Alabama is also beautiful, whether it’s the pristine beaches to the south or the breathtaking waterfalls to the north. Most importantly, whenever you decide to visit, you’ll receive a warm welcome in the “Heart of Dixie.”

Have you ever been fishing in Alabama? Which part of the state did you visit? Hit the comment button and let us know!