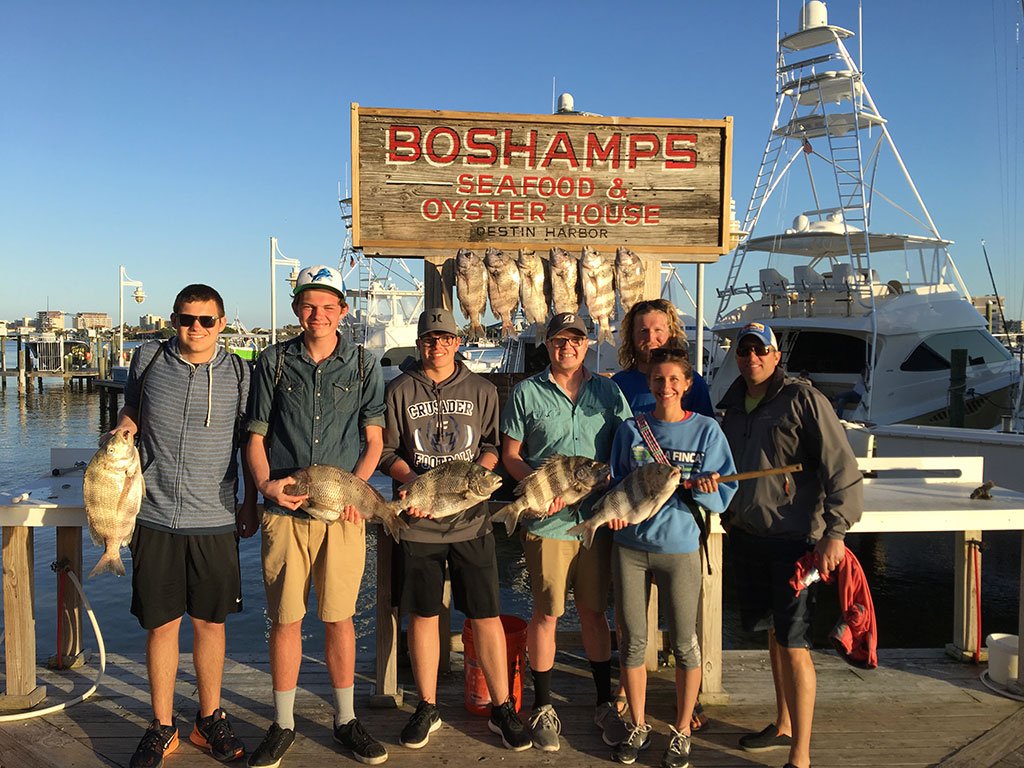 If you’re thinking of taking a trip to the “World’s Luckiest Fishing Village,” you’re in for a treat. Destin boasts flats, backcountry, reefs, and access to the Gulf of Mexico. It’s no wonder that this town is so lauded for its fishing prowess! But before you book your trip, you’ll want to know about the fishing seasons in Destin, Florida.

The good news is that there’s always something biting here in the Florida Panhandle. But, as with everywhere, each species and type of fishing peaks at different times. In this article, we’ll introduce you to what species are biting when, giving you tips on the best way to land that prized catch. So let’s dive in!

What can I expect from the fishing seasons in Destin, Florida?

So you want to know when to visit – heck, that’s why you’ve opened this article! We’re not exaggerating when we say there’s not a bad time to come to Destin. Check out what’s biting now if you can make the trip away with our reports from local captains. Or, keep reading and we’ll break down what you can target each month.

The closest Destin comes to an off-season, January is the time when most captains take their boats out of the water for maintenance. Average highs of just 60ºF make for a chilly adventure if you do visit, but the exciting inshore and nearshore action is sure to keep you warm.

Hit the mangroves and flats, where you can find such delicious creatures as Snappers, Flounder, and Black Drum. Meanwhile, a trip to the bays and the reefs could see you land Sheepshead, among more. You’ll be in for a hearty treat at the end of the day. What better way to wrap up a fishing expedition – especially when it’s cold?

It’s more of the same in February, as winter keeps the temperatures down and the majority of the fish away. Even Black Drum and Sheepshead start going into hiding, although some more varieties of Snappers come out. Flounder are still going strong, so there’s plenty in the way of table fare to target.

Explore the flats, backcountry, and mangroves for your best bet of landing these prizes. The good news is, you don’t need a charter guide to take you out. Fish from shore, try wading, or even hire a kayak or smaller peddle boat and you’ll be able to cast your line in these waters.

Things start picking up in March and every captain worth their salt will have their boat back in the water. It’s all go inshore and nearshore, with the arrival of some monster creatures, so you won’t want to miss out on a trip on a boat. And by the end of the month, the temperature will break 70, so it’s a win-win!

We mentioned the arrival of monster creatures, and Cobia tops the list of newcomers nearshore. But that’s not all. Triggerfish are possible along the reefs, but even dropping your line from a pier could land you something. Pompano join the inshore crew, while Black Drum and Sheepshead return, along with Redfish, so you’re almost guaranteed a fishing frenzy.

Spring brings new life – and that’s true for the water, too. Whether you’re looking to wet your line inshore, nearshore, or further out in the Gulf, things are heating up. Hit the backcountry waters, and two staples of the fishing scene are available, as Speckled Trout join Redfish for a real feast. Meanwhile, Cobia fishing hits its peak near the jetties and piers.

Head further out and the reefs are also bustling with life. Grouper species are available when bottom fishing, while a trolling trip can see you target Kingfish and Spanish Mackerel. And that’s before we even mention the Shark fishing that’s going strong in the Choctawhatchee Bay. What better way to warm up for peak season?

It’s the start of high season in Destin, as the crown of inshore fishing – Tarpon – shows up along the flats. The “Silver King” attracts anglers from all over the world, and for good reason too. Landing one of these beauties will take all the skill and strength you have, so get ready for a serious workout to land a once-in-a-lifetime fish.

And there’s more where that came from. The warm weather brings even more species wherever you plan on fishing. Groupers, Snappers, Triggerfish, and Amberjack abound nearshore, with both kinds of Mackerel also going strong. Along with Tarpon, you’ll find all the usual favorites in the flats and mangroves, so it’s up to you where you want to head.

If you thought Tarpon season was enough to get you excited, wait until you hear what’s a-coming in June. Red Snapper season opens in the Gulf, meaning anglers flock to the Panhandle in search of these elusive creatures. Dazzling, delicious, and incredibly tough-fighting, they’re the all-round game fish. Come and make the most of the short window and you won’t be disappointed!

Elsewhere, it’s more of the same – meaning non-stop incredible fishing. Head out at dawn or dusk, and Tarpon could be biting. Spend a half day inshore, and Redfish and Trout will be your targets. But offshore is where it’s at. Mahi Mahi and Sailfish join the Mackerel for hours of endless fun under the sun in the deep.

It’s all-go in summer, as it’s peak fishing season in Destin. It’s not just the weather that’s red hot, as the fishing has never been better. From 100 lb Tarpon to the still-open Red Snapper season, all the way out to the arrival of Blue Marlin offshore, there’s something for every kind of angler.

Book early, as accommodation and fishing charters book up quickly. The good news is that there’s plenty of choice. Choose from anything from short family excursions in the bay to multiday trips out in the Gulf, or even set up camp on the beaches or pier for a fun day’s fishing. You’re bound to land something wherever you head.

School’s out and it’s vacation season in Destin, and all attention is on deep sea fishing. Yellowfin and Bluefin Tuna reach their peak this month, with oversized monsters available when trolling. You’ll also find Blue and White Marlin in the same waters, so settle up for a real test of your strength to land some meat and a trophy catch.

Mahi Mahi, Sailfish, and Mackerel are also available out in the deep, while the reefs are teeming with Amberjacks, Snappers, and Triggerfish. Fancy staying closer to home? Tarpon still rule the inshore waterways, along with Redfish, Trout, and more. Head out at sunrise or sunset and beat the heat and the crowds, and take advantage of the best bite, too.

You’re spoiled for choice once more as we move into fall. Bull Redfish steal the show inshore, as the larger varieties move into the backwaters to spawn having fed on the piers and flats all summer. Their sheer size is matched by their incredible numbers so it’s a real free-for-all inshore.

There’s no letting up offshore, either, with Marlin and Tuna fishing still going strong. Kingfish continue to offer plenty in the way of an angling test and delicious meat, while Cobia prepare for their fall run, too. Make the most of the end of the peak season before the competition gets underway next month…

There’s a reason the Destin Fishing Rodeo is held in October. One of the biggest angling tournaments in the world, it lasts the whole month and brightens up the whole city. Categories range from small inshore fry to the biggest offshore creatures imaginable, with dedicated sections for women, younger anglers, and much more.

It’s no surprise that the fishing is incredible to coincide with the competition. Bull Reds rub shoulder with Trout, Flounder, Drum, Pompano, and even Sharks inshore. On the reefs, it’s business as usual with plenty hunting for bait fish. Meanwhile, it’s a superstar show in the deep, with Blue and White Marlin, Yellowfin and Bluefin Tuna, and Sailfish on offer. Think you’ve got what it takes? Sign up!

It’s not too late to get out on the water. In fact, the fishing is as good as it’s ever been. It’s still pretty warm, too, with the early part of the month seeing the mercury reaching 80ºF, although the 70s are more common through the rest of November. That makes an offshore trip just as good as staying inshore.

Hit the backcountry, and Bull Reds will still dominate, along with Flounder in the flats and Trout and Pompano all over. Target Sharks in the bay, and Cobia along the reefs. And offshore, it’s your last chance to go after Billfish and Tuna. See out the fishing season in style and kick back for the holiday season!

As the temperature drops, some of the most sought-after fish start making their way to warmer climates, but that doesn’t mean there’s nothing left. While offshore fishing is reserved for latecomers like Wahoo, there’s plenty inshore to keep you entertained.

No prizes for guessing what you’ll most likely be targeting. Yep, you’ve got it – Redfish, Trout, and Flounder top the list of December fishing targets in Destin. And Black Drum and Sheepshead provide a worthy supporting cast. In fact, the latter is well-known for stealing bait, so chances are you’re sure to land one.

Destin: The “Luckiest Fishing Village in the World” for a Reason

As you’ve by now seen, there’s never a bad time to visit Destin, Florida. This little corner of the Sunshine State is a heaven for anglers, with something on offer everywhere. Fancy a quiet day on the flats? No problem! Want to target colorful creatures on the reefs? You’ve got it. What about an adrenaline-inducing offshore hunt? Destin’s got you covered. Have a look at our in-depth guide to find out more, and get ready to hit the waters!

What’s your favorite fishing season in Destin, Florida? Any tips for visiting anglers? We’d love to hear from you in the comments below!