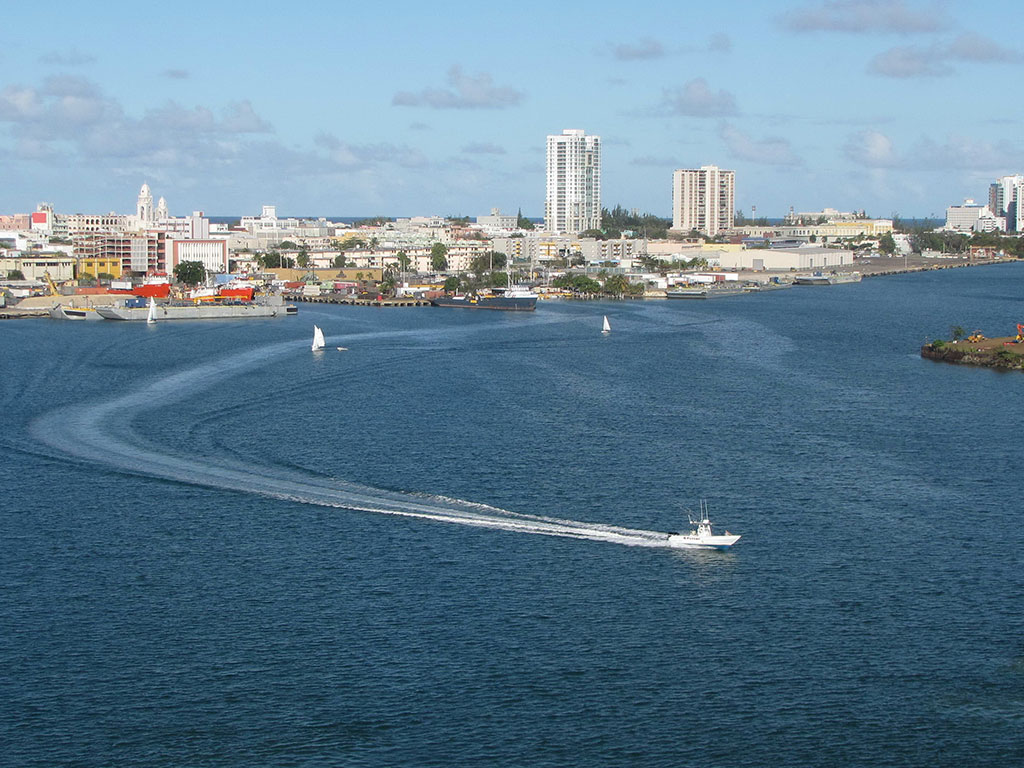 Most islands in the world boast good fishing, but Puerto Rico is off the scales. Situated at the border between the Caribbean Sea and the Atlantic Ocean, it’s at the crossroads of some of the world’s best fisheries. Come deep sea fishing in Puerto Rico and see what all the fuss is about!

The waters here get really deep really fast. And we’re not exaggerating. The island is the closest piece of land to the deepest point of the Atlantic Ocean. This, along with year-round good weather, makes for incredible fishing whenever you visit. Don’t believe us? Well, by the end of this article, you should! We’re here to take you through what makes a Puerto Rico deep sea fishing adventure a must-do.

Where to start when explaining the beauty of any angling location? The fish, of course. We mentioned there’s incredible fishing year-round – but that’s only made possible by the incredible fish that pass by. We’re talking A-listers and only A-listers. So let’s meet the all-star cast.

Often referred to as the world’s “favorite bycatch,” these silvery creatures get an unfair rap in our opinion. They’re pretty cool to look at, reach incredible speeds, and put up an almighty battle once hooked. Not to mention the fact that they’re delicious – hence the by-catch name, we guess. But in Puerto Rico especially, they also grow to incredible sizes.

Head to the south of Puerto Rico or the island of Vieques and you could be reeling in monsters averaging 30–40 pounds. Less than 30 miles from shore, these beauties congregate and feed, meaning it’s “fish on” within less than an hour. Set up with some ballyhoo on a heavy lead, and there’s no end to the numbers you could catch – if your arms can take it, that is!

It’s a general rule of thumb in the Caribbean that where there’s Wahoo, there’s Mahi Mahi. More favored than their shiny friends, these green-yellow stunners really are a sight for sore eyes. Again like the Wahoo, they’re quick, strong, and grow to massive sizes, so you’re in for a treat if you find one on the end of your line.

Head to the same fishing grounds from the south of Puerto Rico to target the largest of these creatures, with a full day trip giving you the chance to land 50-pounders. If you’re in the north, fear not – there’s plenty of Mahi in reach on just a half day trip. These species will be smaller than their southern brethren, but they never disappoint!

If there’s one fish in the world that needs no introduction, it’s Tuna, surely. Possibly the most-loved seafood all over the world, this species is known in every language. But did you know that it’s also one of the best game fish on the planet, too? That’s because it’s cold-blooded and can dive really deep, really fast with your line. Oh, and it grows incredibly big!

In Puerto Rico, you’ll have the chance to go after three kinds of this highly-prized fish. Blackfin and Skipjack varieties are most common, while their oversized Yellowfin cousins can weigh in at 80 pounds or more. Head out of the southern or western ends of the island for the biggest varieties, but you really can’t go wrong – especially when peak season hits. But more on that later…

Mahi Mahi may be leading the beauty pageant so far, but just wait until you come face-to-gills with the next creature on our list. The majestic Sailfish is simply awe-inspiring. And that goes for more than just its looks! Big, strong, quick, and just downright impressive, you’ll need to work your hardest to boat one of these beasts. Thankfully, local captains have all the know-how.

Fishing from the southwestern end of the island during the season can see you hit double figures when it comes to Sailfish. There are few other places in the world that can compete with that! While trolling will be the preferred method of landing these monsters, you can even try fly fishing or kite fishing to entice their bite, so get ready for an angling feast.

“What could possibly top Sailfish?” we hear you ask. Well, the answer is a true bucket-list fish. Another member of the Billfish family, Marlin are known for their fighting prowess and acrobatic leaps, that are sure to leave you lost for words – and breath! These stunners grow to world-record sizes in Puerto Rico, meaning an offshore fishing adventure provides you with a real once-in-a-lifetime opportunity.

Just 10 miles offshore from the west of the island, you’ll find waters as deep as 15,000 feet where Marlin love to hang out and hunt. But that’s not all! Switch to the eastern side and “Marlin Alley” is located at the crossroads of the Atlantic and Caribbean. It’s a must-visit for anyone looking to land a White or Blue Marlin and fulfil that lifelong dream.

So now you know what you’ll be going after, how should you go about it? We already mentioned a few techniques, but what do they mean? In this section, we’ll introduce you to exactly what you’ll be doing to entice the bite of the prized fish on offer.

The bread and butter of the deep sea fishing world, trolling is the most popular technique wherever you are offshore. Puerto Rico is no different, and you’ll find boats from small center consoles up to huge yachts fitted with outriggers to spread trolling lines in the deep.

Trolling literally means dragging a line behind the boat. But the trick with outriggers is that you can spread multiple lines in the water at once. You can use weighted heads to drag your bait or lure below the water, or let them float along the top – depending on where your target fish likes to feed. Try slow trolling or fast trolling – again, depending on what you’re hunting for – and leap into action when the reels screech at the feel of the bite.

Most commonly associated with nearshore fishing in Puerto Rico, you can try dropping your line to the ocean floor even while deep sea fishing. It’s a great way to warm up on your way out to the deep, by targeting Groupers, Snappers, and more. However, when you reach the seriously deep waters, especially around the mounts, you can also try a specialized form of it.

Deep dropping involves using electric reels to drop your line over 1,000 feet underwater. Here’s where some of the ocean’s biggest prizes live, including such elusive creatures as Swordfish. Get ready for an almighty prize if you manage to get one of these monsters to bite!

If you’re something of an angling aficionado, then there’s no challenge quite like deep sea fly fishing. Puerto Rico’s location at the heart of such productive fisheries mean that you can reap great rewards by casting on the fly offshore.

Fish such as Tuna, Mahi Mahi, and even Sailfish all feed near the tops of the water and are so voracious that they even go after flies. Once they bite, it’s a true battle of strength, with just you and your rod against dozens of pounds’ worth of brawn. If you think you’ve got what it takes, we’re telling you there’s nothing quite like it. But beware, this really isn’t for the faint of heart.

What next? Well, where to go fishing, of course. As you may have noticed above, the entire island is surrounded by prized fishing spots. This means that, as long as you’re near the coast, you won’t be far from a productive spot. And even if you’re staying inland, it’s just a short ride to a productive marina where a charter captain awaits. Here’s our pick of where to head out from:

When to Go Deep Sea Fishing in Puerto Rico

We’ve mentioned plenty about “peak season.” But what exactly does that mean? Actually, in Puerto Rico there are peak seasons, with something biting whenever you visit. It all depends where you’re heading out of and what you want to target.

Marlin, for example, peak in summer, arriving in May and lasting through September. And this is also true for most other pelagics. However, this is also the rainy season, meaning that heading offshore can involve getting seasick due to the choppy waters. Don’t worry, though, if the weather is good, a half day trip from the northern end of the island may give you just enough time to land that trophy!

Sailfish, meanwhile, visit later on, staying from September through March. With calmer waters, that means your chance of multiple hookups just got better – especially if you dedicate a whole day to your fishing voyage!

As you’ll most likely be heading out with an experienced charter captain, your fishing license will be covered, so there’s no need to worry about that. You should also be aware that all Billfish must be released, while the crew will keep you updated about bag and size limits for other species.

If you fancy testing your skills against other anglers, there’s also plenty in the way of competitions. One of the oldest Billfishing tournaments takes place here in the way of the San Juan International Billfishing Tournament. Even if you don’t fancy taking part, some of the catches are sure to blow your mind!

If this hasn’t convinced you that Puerto Rico is the place to be to land that once-in-a-lifetime catch, we’re not sure what will! Top off an incredible vacation on the pristine beaches by heading out to the crystal clear blue waters. There are few places in the world that can compete with what’s on offer. You simply must give it a try!

Have you ever been deep sea fishing in Puerto Rico? How was it? Any tips for first-timers? We’d love to hear from you in the comments below!