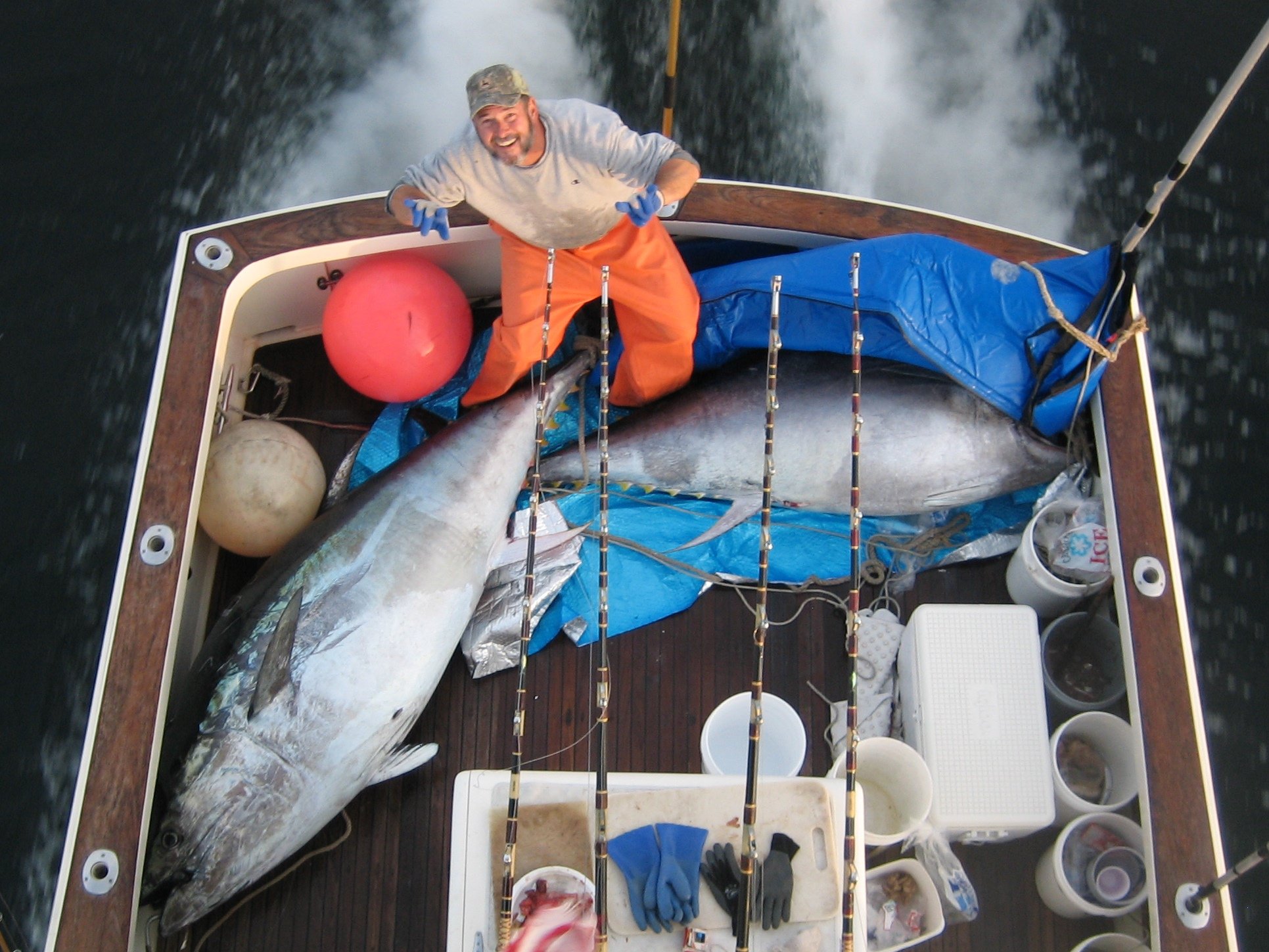 The Bay State surely has a lot of claims to fame. Universities and sports aside, it’s one of the best places for fishing in New England, especially when it comes to deep blue waters offshore. Why is deep sea fishing in Massachusetts so great? Only anglers who have never visited MA before would need to ask!

If you’ve been dreaming about experiencing a real deep sea fishing adventure, give Massachusetts a go. It’s home to not only some incredibly generous offshore waters, but also a lot of skilled captains and crews that work hard to show both locals and visitors all the deep sea wonders Massachusetts has to offer.

In this guide, we’ve covered everything you need to know about the offshore monsters this state is loaded with, along with the top spots to land them and the best techniques to get that bite. So, without further ado…

The deep seas of this state are as beautiful as they’re productive. Summer through fall is generally the best time to go deep sea fishing in Massachusetts. A great number of anglers, both locals and visitors, head offshore to try and land their own torpedo-shaped Tuna. There are plenty of other exciting species you can target, but let’s start with Tuna…

It’s a sunny summer day in Massachusetts and you’re headed offshore on a sportfishing boat with you tackle, ready for a battle. As soon as you spot your target, down go the jigs, ready for some amazing hookups. What’s your most desirable catch? Well, of course, it’s Tuna.

First of all, most deep sea anglers hunt for Bluefin Tuna. These giants live in deeper waters, from which they emerge fast and ready to fight even the most seasoned angler. Tuna fishing in Massachusetts has been successfully inspiring generations of anglers to dedicate their lives to tracking down the biggest trophies.

Generally, Bluefin show up at the end of May and the first weeks of June, staying all the way through October. They’re often joined by Yellowfin and even Blackfin Tuna, which are also targeted during the summer months. In early summer, Tuna sit in chilly waters just off the tip of Cape Cod, moving east as the waters warm.

As you jig down to get that bite, get ready for some serious fights. Hardly any Tuna comes quietly on its way to the dining table!

While Tuna fishing is a pretty big deal in Massachusetts, a lot of anglers also enjoy hunting for Sharks. Pelagics can get pretty big here, with Chatham holding the IGFA all-tackle record for Mako Sharks at 1,221 pounds. Of course, it’s not only about Makos here. Blue and Porbeagles can reach up to 500 pounds, along with Threshers, which may get even bigger.

Massachusetts’ Shark fishing calendar runs June through October, with these monsters arriving a bit later than Tuna. There are numerous species that inhabit the waters of Massachusetts throughout the year, though. Porbeagle Sharks hang out in the nearshore waters pretty much all the time, while Thresher Sharks can be found close to shore throughout summer and until October.

However, the biggest and most sought-after Sharks are Mako and Blues, which bite best when the summer peaks. Where can you find them? Well, they show up all around Massachusetts! Popular Sharking spots include Falmouth and Barnstable with the waters of Nantucket Sound and Martha’s Vineyard. Alternatively, you can fish in Massachusetts Bay out of Gloucester, Marblehead, and Winthrop.

Hardly anything compares to battling out with a monster Shark. They can make your pulse racing like nothing else when you hook one of them! Getting one of these ocean predators to bite is something you’ll surely remember for years to come.

Picture this: it’s Christmas Eve in Massachusetts, the coast is blanketed by snow, you’re having dinner with your family, and talking about your future Marlin fishing trip. It’s not something you’d expect, is it? The best part about deep sea fishing in Massachusetts is that you can also fish for Marlin!

Come July, and plenty of local crews leave the docks behind to head out for Blue and White Marlin. As you’ve probably already guessed, the southeastern coast of New England isn’t necessarily the first thing that comes to mind when it comes to Billfishing. However, Blues and Whites are part of the local ecosystem, as long as you know when and where to find them.

The best time to hunt for Marlin is late summer. Head to spots like the Fingers and the Dump or opt for an adventure at the Canyons. If you’re feeling all-in, book an overnight charter from Gloucester to increase your chances of meeting your own Marlin.

The key to successful Marlin fishing in Massachusetts is booking a trip with the right captain. Of course, it applies to all species, but you’ll need extra knowledge when it comes to Blues and Whites in the Atlantic!

There’s no way we could miss out tasty Haddock and their famous cousins Cod. Both are kings of offshore waters, especially in Cape Cod. These sought-after species offer year-round action, so you won’t be limited to summer and early fall. Plus, you can also add Pollock and Atlantic Mackerel to the fishing menu, along with Mahi Mahi and Wahoo. The opportunities are indeed endless!

When it comes to deep sea fishing in Massachusetts, you’re spoiled with choice. The best spots depend on what you’re hoping to catch and what type of trip you’re looking for. In most cases, you’ll need to travel pretty far offshore, from 20 to 150 miles.

In this section, we picked the best destinations that can help you get to know the deep blue waters just a bit better. Let’s start with the state’s capital.

Deep sea fishing in Boston focuses on Bluefin Tuna and Sharks. To get to these monsters, you’ll hit the blue waters of Stellwagen Bank. This is a national marine sanctuary packed with Squid and Herring, and, in turn, Bluefins every year.

If the Stellwagen is busy, you can blow right past it and head to the canyons and remote ocean ledges. The only thing is that these spots are around 150 miles from Boston, so you’ll need to prepare for an overnight charter or a multi-day trip.

Plymouth gives anglers the best of both worlds – rocky shores and beautiful bluewaters. Deep sea enthusiasts head out of Plymouth Harbor to explore the offshore waters. Needless to say they have a lot of fun catching Haddock there!

The Stellwagen Bank lies about 20 miles from the shore. Plymouth is a good starting place for those who want to fish the famous duo – Tuna and Sharks. It goes without saying that you can expect hot action during the season.

It’s no secret that a lot of anglers call Cape Cod the fishing mecca of Massachusetts. Well, Hyannis, a pleasant village with a lot of local fishermen and tourists from all over the US, is often called Cape Cod’s “capital.”

The beauty of Cape Cod is at your fingertips in Hyannis. Here, you can try your luck at Billfishing, along with fighting for Tuna. If you decide to venture further out, you can easily get to Nantucket Island and Martha’s Vineyard.

Speaking for Nantucket Island, it’s a destination no hardcore big game angler should ever miss. This is a real getaway to the offshore Atlantic grounds, full of all sorts of wonders. Bonus points if you manage to spot the whales. A true angler knows that it’s always a good sign!

You’ll be able to feel the adrenaline when you hunt for Sharks and Bluefin Tuna, although Nantucket Island is now only about these two. Here, you can easily add Mahi-Mahi and even Marlin to the list of your potential summer catches.

If you pick Gloucester as a starting point of your Massachusetts deep sea fishing adventure, you’re in for a treat. This is where you can get to Cape Ann, a rocky cape nestled on the Atlantic coast. The summer season is all about Bluefin Tuna which migrate here year after year. Pelagic Sharks are also nearby in the deeps, along with Blue and White Marlin.

If you’re willing to head even further out, you can also enjoy the action at Stellwagen Bank, Straw Hat, Tillie’s Ledge, and Jeffrey’s Ledge just 30 miles up the coast from Gloucester. In fact, you can stay a bit longer and explore them all!

From skilled professionals to amateur anglers, anyone has a chance to hook a big fish in Massachusetts. There are various techniques that produce good results season after season. For instance, some locals use popping rods and floating lures for feeding Bluefin Tuna, while others prefer vertical jigging on stand-up spinning gear.

Tuna are often caught by jigging, chumming, and trolling – the bread and butter of any bluewater trip in the state. When trolling, you can use dressed baits and lures, while jigging can be done with metals and soft plastic. For Marlin, both high and low speed trolling with Ballyhoo can put a catch on the end of your line.

You can attract many Sharks attention by throwing chum slicks or clams in the water and getting your super-heavy tackle ready when you feel a bite. Chunking is also used when fishing for Tuna. Chunking and chumming are timeless tactics for both species, and you can easily try both on the same trip.

It’s always a good idea to find someone who’s been fishing the Massachusetts side of the Atlantic for decades. However, whether you’re planning to fish by yourself or looking to book a charter, you’ll need to know what you want to target and where, and climb on board with some knowledge.

Anything else I should know?

Any angler aged 15 and older needs to have a valid Massachusetts fishing license before they hit the deep blue waters. This applies to both MA residents and visitors. There are some exceptions to this rule. You can learn more about the fees and types of MA fishing licenses in our post here.

Along with obtaining a fishing license, we recommend checking all the local regulations ahead of time. Even if you’re fishing with a charter, it’s always a good idea to check the seasonality and restrictions on the MassFishHunt website before you hit the waters.

Massachusetts Deep Sea Fishing – the Best of the Atlantic

Any list of top deep sea fishing spots to explore should include the Codfish State. While the bluewater season here is limited to the summer and early fall months, when it’s on, it’s really on. Having a huge Tuna succumb to your offering is a dream come true for any angler, not to mention hooking a monster Shark. It’s hard to go wrong with deep sea fishing in Massachusetts.

Have you been deep sea fishing in Massachusetts? What are your favorite spots and catches? Is there a story you’d like to share with us? Let’s talk in the comments.