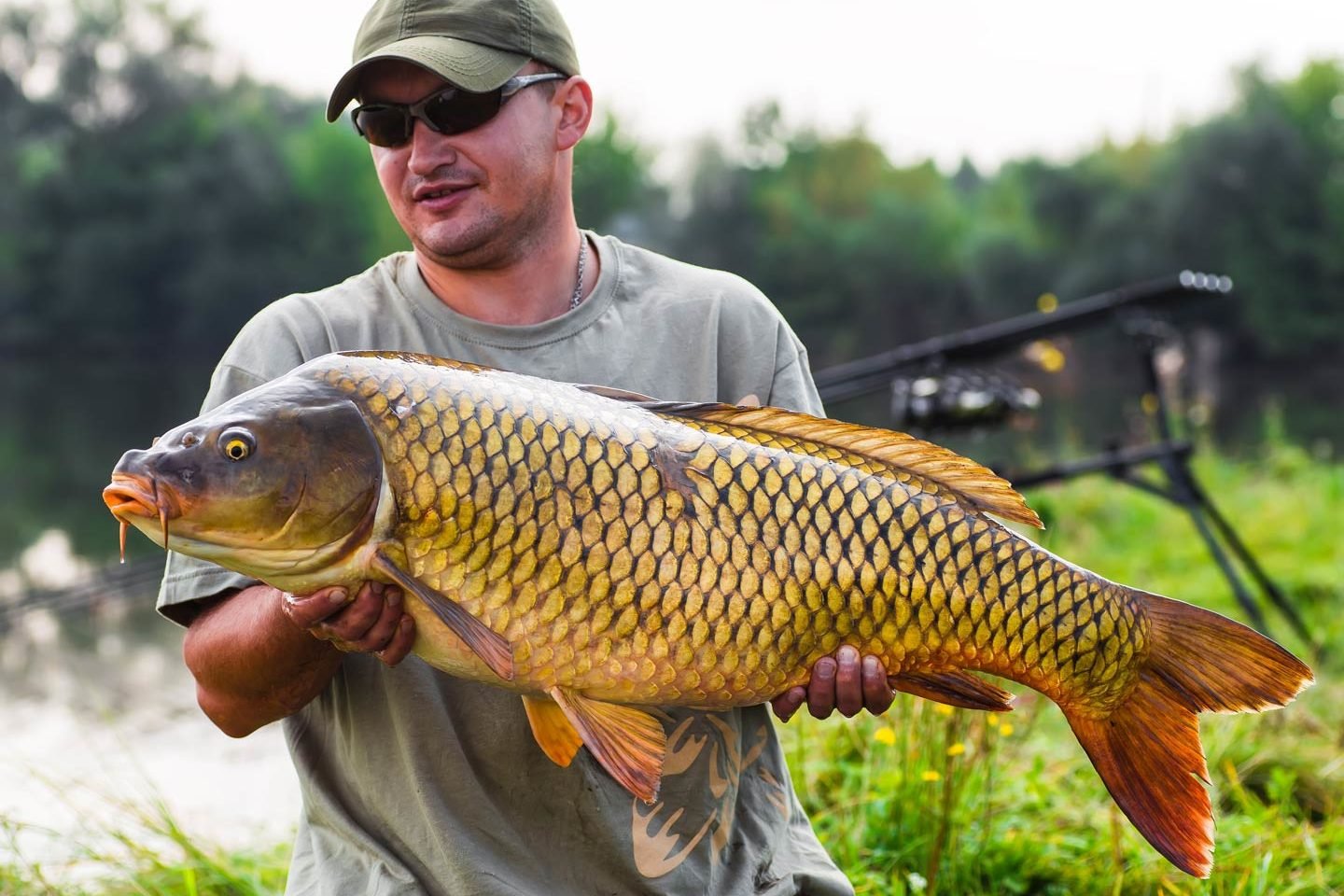 Depending on where you live, Carp are either prized target fish or a little bit of a nuisance. They’re native to Europe and Asia and, in the former, exploring flowing rivers for huge fish is a much-loved tradition. In the latter, Carp have failed to reach bucket-list game fish status. And in the US? These fish are generally seen as an invasive species and have left a devastating impact on many fisheries. Because of this, bowfishing for Carp has seen a booming growth in popularity.

In the past, bowfishing has been written off as something that’s only suitable for archery enthusiasts or keen hunters. In fact, it’s a technique that requires absolutely no previous angling experience. It’s perfect for newbies, as well as those of you that have an axe to grind with these invasive fish. So how exactly do you go bowfishing for Carp? Don’t worry – we’ve covered everything you need to know below. Let’s dive in…

What species of Carp can I go bowfishing for?

Let’s start with the Common Carp, which are native to Europe and Asia. They’re easily identifiable by their large golden scales and the two small whiskers on the sides of their mouths. They can also grow up to impressive sizes. We’re talking up to 80 pounds in weight and 5 feet in length!

Common Carp were introduced to the US in the 1800s, as both a fun game fish and a source of food. However, due to their ability to rapidly reproduce and thrive in a wide range of environments, they quickly invaded waterways all throughout the country, with damaging results. The Common Carp is, as befits its name, the most common Carp target across the US.

Varieties of Asian Carp such as Grass, Silver, and Black Carp made their way to waterways in the US and inhabit 45 states. Grass Carp are the smallest of the group, but they can still grow up to 4 feet in length! They’re identifiable by their silver-greenish hue. Grass Carp are more oblong in shape, and have dark silver scales. Black Carp can weigh up to a whopping 500 pounds, and have black-tipped scales.

The good news is that, no matter which Carp species inhabits your corner of the US, chances are you’ll be able to bowfish for them. Bowfishing is legal in almost every state for non-game fish and invasive species. Carp are bottom dwellers that prefer to munch on vegetation. This means they’re less susceptible to traditional fishing techniques that rely on mimicking live bait. Bowfishing doesn’t involve this, so it’s the perfect way to get your hands on some Carp!

Where and when can I go bowfishing for Carp?

Although Carp inhabit a whopping variety of locations, we’ve chosen to focus our attention on the most popular bowfishing locations across North American. Why? Simply put, it’s the most popular place to bowfish for them (although New South Wales in Australia might come a close second) – especially the US. In other locations, many anglers choose to fish for them using other techniques, such as chumming.

As we mentioned, Carp inhabit a massive percentage of waterways in the US, spanning 45 states. The Gulf Coast states are especially popular bowfishing locations, with Lousiana and Texas standing being some of the most popular places to go. They thrive in freshwater lakes, rivers, reservoirs, and ponds, and tend to lurk around reed beds, lilies, and other structure, especially early in the morning and late in the day.

As well as picking the right time to go bowfishing for Carp, it’s also important to fish during the right time of year. Some locations have open and closed seasons but generally, the summer and fall months between April–October see the most action. It’s always best to check with the fishing and wildlife department of your chosen state, though. In mid-late fall, stick to early mornings and early afternoons. If you’re fishing later in the season, midday is the best time to grab your bow.

How can I go bowfishing for Carp?

Although bowfishing might sound intimidating, especially if you’re a novice angler, the “how to” is actually pretty easy, and you can follow the same steps no matter what fish you choose to bowfish for. Bowfishing for Carp essentially involves hunting your chosen fish with a bow and arrow, at close range. You’ll be hunting in waters that are generally pretty shallow and clear, as this will help you identify your target. This also reduces the chance of missing!

If you’re looking for an in-depth guide, you can check out our blog on bowfishing in general. But if you want to get to grips with the basics, we’ve covered them below!

1. Get the Right Gear

Bowfishing gear is generally pretty simple, and many stores and companies even offer complete bowfishing packages that contain everything you need to start out. This consists of a bow, arrow, reel, and arrow stabilizer. Any recurve or compound bow will do the job nicely. Recurves are traditional bows and they have tips curved to the front for power. They’re lightweight and easy to handle but are less precise than mechanical compounds. You don’t need a heavy-duty bow, either. A bow with 30–40 pounds of draw weight works.

For your arrow, the most important rule is to make sure that you don’t use hunting or archery arrows. Opt for any arrow that’s made especially for bowfishing. There’s a variety of them out, made out of anything from fiberglass to carbon, to hybrid varieties. For larger fish, carbon is the best choice. As for the arrow point, make sure you choose any option that doesn’t need to fully come out of your fish to set its barbs.

Finally, when it comes to the reel, there are a few options out there. Firstly, there’s the trusty hand reel, an excellent option for beginners. It’s easy to use and very affordable. When you’ve shot your fish, you simply need to grab your line and roll it around the reel as you pull. A 70 lb braided line is a good starter option. The bottle reel is similar but involves a bottle that houses your line, making it a popular option. Finally, there’s the spincast reel, which is beloved for its accuracy and ability to retrieve lines quickly.

The great thing about bowfishing is that, depending on where you choose to fish, you’re not tied to having to step foot on a boat. If you’re worried about seasickness or want your fishing trip to be pocket-friendly, bowfishing may be the perfect activity for you. You can wade fish and have a day that’s just as productive. If you choose to fish on a boat, it’s best to select a vessel that has a shallow hull and can cruise shallow waters easily, or to fish alongside a local guide who has a vessel suitable for bowfishing.

3. Stay Stealthy and Take Your Aim

As we’ve mentioned, the actual mechanics of bowfishing for Carp aren’t too complex. It’s all about stealth and aim and, luckily, these are things that you can practice while still having plenty of fun. Staying stealthy can be difficult, but Carp often make it easy for you by breaching waters and making themselves known. If you’re approaching on foot, you’ll want to move slowly and look out for any underwater vegetation that could make a noise, and avoid casting a shadow over your target.

Next is the fun part – aiming! Remember that, when light waves hit water, they refract or bend, which means that your Carp actually isn’t exactly where it appears to be. Because of this, you’ll want to aim your bow slightly beneath your fish. Bowfishing enthusiasts recommend initially aiming around 6 inches beneath your fish, and then follow the 10-4 rule. This basically means that, in order to hit a Carp that’s a foot below the water, you should aim 4 inches beneath it, and then add an extra 4 inches for every 10 feet in distance you travel. And remember that practice makes perfect!

Bowfishing for Carp: A Unique and Fun Way of Angling

If you’re looking to try something new or do your bit to control the ever-growing Carp population of North America, bowfishing should go straight to the top of your list. It’s exciting, fun, easy to grasp, and will give you some impressive angling stories to tell your friends and family! It’s time to grab your bow and arrow, and let the hunt begin.

Have you ever been bowfishing for Carp before? Where did you go? Any stories to share? Let us know in the comments below!

Katie is a Philosophy graduate from the UK, and now she spends her time asking (and answering!) the important questions, such as: What, exactly, are the best ways to bait a hook for Redfish? She first cast a line in Florida as a teenager, and it took her a while to circle back to angling as a hobby, but now she’s hooked. Her personal fishing highlight? Reeling in a rare Golden Trevally while cruising the deep waters off the United Arab Emirates!