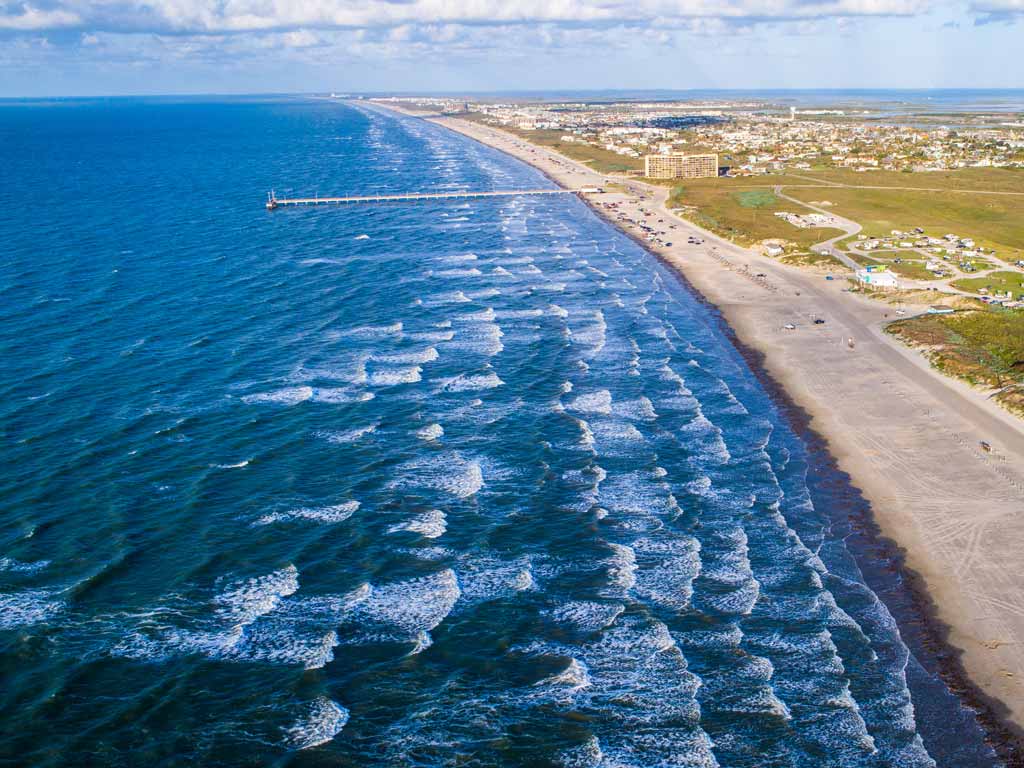 There’s an old saying that Lone Star State residents use both as a term of endearment and to poke fun at anyone not fortunate enough to live here. It goes like this: “Everything is bigger in Texas.” Now, depending on where you’re from, you may have a different opinion about the saying. However, when it comes to the quality of deep sea fishing in Texas, you’d have a hard time proving them wrong.

Much like the rest of the Gulf Coast, Texas enjoys easy access to the prolific waters of the Gulf of Mexico. Its many reefs, wrecks, and offshore oil rigs provide a home for all kinds of delicious bottom fish. If that’s not enough, there’s also the option of chasing after different species of pelagic fish as they race along the Texan portion of the Gulf.

If you’d like to find out more about deep sea fishing in Texas, stick with us. We’ll first cover some of the most exciting species you can encounter exploring these waters. After that, you’ll get to read up on the most common techniques you’ll use to entice the offshore bite. We’ll also name some of the spots to visit, the best seasons to target certain fish, and some basic regulations to bear in mind. Let’s get into it!

As you can imagine, there are many different fish that inhabit the Gulf of Mexico. And while species may change with the season, there’ll always be something you can chase after. Of course, everyone has their favorites, so take a look at ours…

Seafood lovers will tell you, there are very few things in life as flavorful as the taste of freshly grilled Red Snapper. In addition to this, they’re also fun to catch and suitable even for beginners to fish for. When you consider this and the fact their federal season only opens once or twice a year, it’s really no surprise that anglers plan their entire vacations to get the opportunity to catch these delicious fish.

As far as Snapper fishing goes, Texas can go toe to toe even with the likes of Florida and Alabama. The offshore waters feature numerous artificial reefs and wrecks that make for perfect hiding spots for these fish. Also, Texas often allows anglers to target Red Snapper even outside the federal season. However, you’ll have to do it within state waters.

The vibrant Mahi Mahi are another great eating fish you can target while deep sea fishing in Texas. They’re eager biters and good fighters, capable of going off on explosive runs once you hook them. That being said, Mahi Mahi generally don’t have as much stamina when compared to other pelagics. This makes them a perfect target for novice anglers looking to fall in love with big game fishing.

Another reason why you might want to set your sights on Mahi Mahi is that they can be found closer to shore than some of the bigger fish. As you ride away from Texan shores, look for weed lines and floating debris. These attract bait fish and consequently the Mahi Mahi that feed on them. While these fish may occasionally be found even in state waters, you’ll have the most luck targeting them in the 20–30 mile range and beyond.

Now, if you’re looking to ramp things up and tackle some more challenging fish, Tuna will give you exactly what you’re looking for. These musclebound fish make for some of the most exciting fighters in the ocean. They’re built for power and endurance, and are armed with the kind of tenacity few other fish possess. If you’re lucky enough to hook into a big Tuna, it’ll be an experience you’ll never forget.

There are several different types of Tuna that prowl beneath the Gulf’s waters. If you’re fishing out of Texas, most of the time you’ll run into Blackfin and Yellowfin Tuna. Between the two, Yellowfin Tuna will present a tougher battle, as they can get much bigger than their cousin. However, Blackfin Tuna are still a blast to catch, and both species are thoroughly delicious to eat.

As with other pelagics, you’ll have to make a run offshore to find Tuna. While they can be found around different drop offs and deep rock formations, the distant oil rigs offer the hottest action. Oil rigs attract bait, which attracts various kinds of deep sea predators, including Tuna. Just be ready for a ride, as the prime fishing grounds sometimes lie over 100 miles offshore.

While we’re on the topic of tough-fighting fish you can come across in Texas, very few can compete with the likes of Blue Marlin, White Marlin, and Sailfish. These Billfish are absolute superstars in the world of big game angling. Not only are they supremely powerful and lightning-fast, but they’re also incredibly acrobatic. Both Marlin and Sailfish can jump out of the water with the entire length of their bodies, putting on a dazzling show as you struggle to reel them in.

Considering how difficult they are to catch, Billfish are best suited for seasoned anglers. You’ll need to head offshore and spend ample time on the water if you hope to find them. Marlin are especially rare so you’ll have to get a bit lucky as well. However, once you finally do get that Billfish bite, you’ll have an experience to treasure and tell stories about forever.

We’ve presented a few of our favorites, but there are many other species you’ll come across while deep sea fishing in Texas. Among others, you’ll get to wrestle Amberjack, Lane and Vermilion Snapper, Cobia, and, occasionally, a massive Warsaw Grouper. There’s also the possibility that a roaming Shark will take your bait, just to give you a taste of what it’s like to step into the arena with an apex predator.

Some other pelagics that’ll occasionally take the bait as you’re trolling are King Mackerel and Wahoo. Both of these are great fighters and excellent eating fish. Wahoo, in particular, are among the quickest fish in the sea, and will give each lucky angler a thrilling battle. All that’s up to you is to decide what you want to chase after and how.

How to Go Deep Sea Fishing in Texas

Compared to fishing inshore or nearshore, deep sea fishing is a whole different ball game. To begin with, you’ll need a boat that can handle the open waters. Then, you’ll need equipment that can match up to the offshore species you come across. For most anglers, the easiest way to get all of this is to hop aboard one of the many deep sea fishing charters in Texas.

Aside from the vessel itself and the equipment the crew will supply you with, you’ll get the added convenience of fishing with a professional charter captain. They’ll make sure that your trip is both productive and safe. Furthermore, your captain will let you know which species are biting at the time of your trip and how to go about catching them. If you’re wondering what kind of fishing you could be doing, have a look at a couple of basic techniques…

Trolling is a tried and true method of catching fish. It’s both simple and ingenious, as all you need to do is set up a rod spread, bait the hooks, and start driving the boat so the bait mimics swimming fish. Since there’s no need to cast, trolling is also very suitable for beginners. However, you do need to have the skill and the physicality to successfully reel in the fish you hook.

As far as species go, trolling is typically used when you’re hunting for pelagics. In Texas, this method will net you the likes of King Mackerel, Mahi Mahi, Wahoo, and Tuna, together with Sailfish and Marlin. Of course, it all depends on when and where you fish, as well as what you feel ready to target. If you don’t have a lot of experience fighting big fish, start with smaller ones and work your way up.

While they’re two different techniques, both bottom fishing and jigging involve lowering your weighted tackle vertically into the water. As you don’t have to know how to cast in order to do this, even novices can do it.

There are a couple of differences between the techniques though, the first being the gear you’ll use. Typically, jigging rods are more flexible, compared to the more sturdy bottom fishing rods used for deep-dwelling fish. Also, jigging doesn’t involve lowering your bait all the way to the bottom, but rather to the depth where your fishfinder has spotted the fish. At that point, you’ll start jigging the rod, mimicking injured bait ready to be eaten by your soon-to-be catch.

If you’re deep sea fishing in Texas, especially around the oil rigs, you’ll usually do some jigging when targeting Blackfin Tuna. When bottom fishing, you’ll get to tussle with species such as Amberjack, Snapper, Grouper, and more. There’s also the option of deep dropping, which is a variation of bottom fishing using electric reels. It’s used to reel in Tilefish and massive Grouper, as well as Swordfish.

When to Go Deep Sea Fishing in Texas

The Lone Star State is blessed with excellent year-round fishing. This being said, the fishing conditions do vary across the season. This especially applies to deep sea fishing, as you have to have the weather on your side if you want to venture far offshore.

The season starts heating up in spring, with the summer being the most popular time to go deep sea fishing in Texas. It’s when all the pelagic fish such as Mahi Mahi, Tuna, Sailfish, and Blue and White Marlin will be roaming through the area. Of course, it’s also when the federal Red Snapper season usually opens, allowing anglers to catch their fill of these delectable fish.

But that doesn’t mean you can’t catch fish during other times of the year. There’ll still be plenty of pelagics present in the fall. Depending on the year, you may even get a second shot at federal Reds in October or November. During winter, you can target both Yellowfin and Blackfin Tuna, as well as the speedy Wahoo. So no matter when you visit, you’ll find something biting the end of your line.

Where to Go Deep Sea Fishing in Texas

Another thing your captain will help you with if you’re fishing aboard a charter is picking where to fish. They keep their fingers on the pulse and know where to go to put you on your target species. However, let’s take a look at some of the starting spots you can pick for your deep sea adventure…

Before you’re ready to head out, you’ll need to get your Texas fishing permit. This applies to most anglers over the age of 16. However, there are some exceptions you can take a look at in our dedicated Texas fishing license guide.

Besides this, it’s always good to get familiar with the fish size and bag limits before you head out. These can change from season to season so it’s good to stay up to date. This way, you’ll save yourself some of the emotional hurt when you discover you have to release some of that hard-earned fish. The best way to get up to speed on these regulations is to visit the TPWD website.

Even though the distances you’ll need to cover can at times seem daunting, for anglers with enough skill, knowledge, and bravado, it’ll be absolutely worth the effort. Texas truly has it all when it comes to deep sea fishing – from amazing reefs and underwater canyons to offshore oil rigs teeming with fish. It all comes down to which one of your angling fantasies you want to turn into reality.

Have you ever been deep sea fishing in Texas? What’s your favorite species to catch? Hit the comments and let us know!